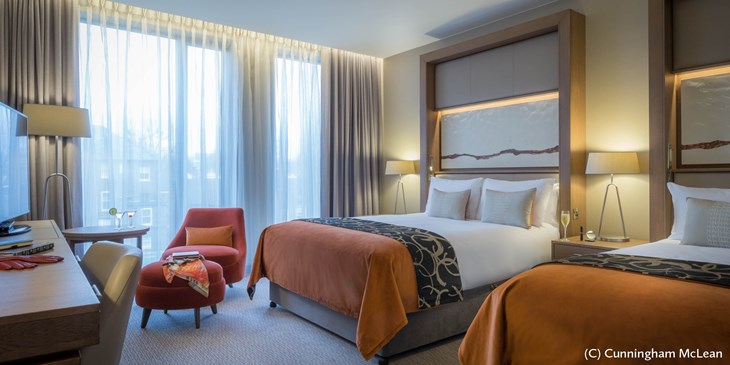 Curtis Furniture & Doors have worked in partnership with the Dalata Hotel Group and interior design practice Cunningham McLean to deliver hotel bedroom furniture – for a hotel rebrand and complete refurbishment of the Clayton Hotel Chiswick.

The project scope included the fit-out of a new 104 bedroom extension and an upgrade of 123 existing bedrooms. The first phase would be opened in September 2015, with the remainder phased over the next 9 months. The hotel would remain fully operational throughout the project.

For the new bedrooms, we manufactured bespoke furniture in solid oak and oak veneers, then hand finished it in the colour palette designed by Cunningham McLean.

The headboards feature upholstered panels that we handcrafted in-house. We also built a fully integrated power and lighting system into the headboard structure.

All other power in the room was encased in bespoke wood veneered cable management systems, so as not to compromise the sound proofing between rooms.

Feedback from the Dalata Hotel Group regarding the quality of our work and the project turnaround time on phase 1 was enormously positive. We are now engaged in the manufacture of bedroom furniture for the next phase of development at the hotel.

“We worked closely with Curtis Furniture on the Clayton brand design and roll out at their Chiswick hotel. The project timescales were tight and they delivered on time to a very high standard.”

Have a look at the bespoke furniture at the rebranded Clayton Hotel Chiswick: